In 1729, Voltaire wrote that “paper money eventually returns to its intrinsic value – ZERO.”

Francois-Marie Arouet, better remembered by his pen name “Voltaire,” was born on November 21, 1694, in Paris, France, and died on May 30, 1778. He was one of a prestigious collection of exceptional European writers of the time. Voltaire continues to be held in worldwide repute as a courageous crusader against tyranny, bigotry, and cruelty. He was a major figure in the Enlightenment, a writer, historian, and philosopher, renowned for his advocacy of freedom of religion, freedom of speech, and the separation of church and state.

Voltaire’s words above described that, in any final attempts to save any economic system, governments will print unlimited amounts of money, yet by printing the unlimited amounts of money, they will render their paper money totally worthless, causing it to eventually reach zero value. This is nothing new. History repeats itself. Governments in various countries have done this countless times throughout history when their financial situations became dire.

The devaluation of Roman money, the Roman denarius, largely contributed to the economic demise of the Roman Empire until its final conclusion in 476 A.D.

The silver in a Roman denarius was minted as the national currency of Rome starting as early as 211 B.C.

Around the size of a nickel, the Roman denarius was approximately worth a day’s wages for a craftsman in Rome.

This is different from today’s paper or electronic “money” which is backed purely by confidence in a nation’s government. This paper money is also called “fiat” money.

The Romans’ economic problems started when Roman governments wanted to spend beyond their means. So, the Roman Treasury started re-minting the denarius, and continued to do so, to contain less and less silver in efforts to keep up with the government spending spree that was far beyond its tax revenue base. As you would expect, with less silver in the coins, the value of each coin declined.

Rome is not alone in history.

Printing unlimited amounts of government fiat currency happened in 1795, leading to the French Revolution. The Weimar Republic (German Reich) did this in the late 1930s after WWI leading to WWII, when a wheelbarrow of paper money was needed to buy a loaf of bread. More recently, in March 2021, Venezuela’s government announced that it was releasing new 200,000; 500,000; and 1-million-dollar bills “to meet the requirements of the national economy.”

These are not the first nor the last times governments will try to print their way into political office or out of economic troubles. Want examples closer to home? Think about the western world’s governments’ actions over the last few years, the rise in prices, and the loss of buying power with fiat money.

To avoid the inflationary pressure highlighted above, governments need a constraint to prevent constant printing of money, making YOUR money worth a little bit less each day. We believe the best defense against this currency devaluation is an allocation to a hard asset such as precious metals, mainly gold.

Many people have likely heard the saying “Good as Gold” indicating a rock-solid assurance of something. This saying originally referred to the gold standard “backing” of fiat currency.

Gold and other precious metals have been used to “back” currencies in the past because the metal is small in size (compact) compared to its value, is easily transported, is recognized worldwide as having some value, and holds its value because of its durability and limited supply while it is also divisible into smaller value amounts.

BVCU has recognized the problem of fiat money devaluation.

Considering the above, Bow Valley Credit Union, in addition to having the Credit Union Deposit Guarantee Corporation’s unlimited 100% guarantee of your deposits, has taken extra precautions and has an allocation of physical gold or other precious metals to protect against the decline in value of the Canadian dollar. Effectively, Bow Valley Credit Union is “GOLD BACKED.” This, in our opinion, is the best form of insurance to protect YOUR member deposits from the constant devaluation of currency.

BRITAIN: In 1696, Sir Isaac Newton took up the post of Warden of the Mint, and subsequently held the office of Master of the Royal Mint. In 1717, he implemented a “gold standard” whereby 40% of the British currency was backed by gold. It remained this way until the Great Depression in the 1930s.

Since most people in Alberta transact in Canadian dollars, so must their financial institutions. Therefore, we cannot fully “back” our deposits dollar for dollar, which would be the true definition of being “backed” by gold, nor could we even subscribe to the Sir Isaac Newton standard of 40%. It would not be profitable nor prudent, while we live in a world of fiat money, to do so. As an organization, we need the ability to transact, borrow, and lend with fiat currency in order to remain profitable.

At BVCU, we think of gold and other precious metals as insurance. We have a significant allocation to gold, treated like a currency, which we think is enough to protect your deposit from devaluation, but not enough to be considered “fully backed” by gold.

Think of the BVCU “Gold Backed” statement as being a premium “value add” above the Bow Valley Credit Union 100% deposit insurance policy to protect YOUR deposits from a sudden devaluation of fiat currency.

If you’re a resident of Alberta and would like to open a personal account, you can join today!  To become a member, a $25 Common Share requirement is needed plus an additional deposit to open your account; you are now a member! A Member Card would be mailed directly to you, with a pin a few days later. You are now set up to use online banking and do day-to-day transactions; between online, mobile, and telephone banking, there's not much you can't do from anywhere at anytime! Your Member Card can be used at any Canadian credit union ATM for free.

Unfortunately, we aren't capable at this time to open business accounts online (coming soon!).This process can be started by gathering information by email, and we would need in person contact for signatures.

Accounts or investments can be opened to all Alberta residents or corporations with their Head Office located in Alberta. If you are currently a member with BVCU, yet live out of province, you are still able to invest with BVCU!

Unfortunately our government regulations limit BVCU to members who reside in Alberta.

Need to see a change to sound money in your province or state? Become a local credit union member! Join your local credit union's Board of Director and demand change. Sound money is important to everyone and fiat money printing negatively impacts us all, no matter what part of the world you live in.

As far as we know, Bow Valley Credit Union is the only financial institution in Canada that is backing its deposits with gold and/or other precious metals.

On June 5, 1933, the United States started the process of uncoupling the US dollar from gold, whereby their currency became no longer interchangeable for gold, beginning when the US Congress enacted a joint resolution nullifying the right of creditors (paper money holders) to demand payment in gold prior to WWII. This was done because many countries attempted to repatriate their fiat currency US dollars for gold, which caused the US’s gold reserves to significantly decline.

In 1971, the connection between gold and the US dollar was completely severed when US President Nixon took the US dollar off the gold standard, therefore removing the “gold backing.” From this date, “money” has been mostly created by commercial banks when they make loans and by the US Government when it issues cash and coins, in a form of “credit of US government.” The US dollar was no longer “backed” by anything, other than confidence in the US government.

The gold standard was abandoned due to the propensity for governments to overspend beyond their tax revenue, because a gold standard would constrain the government’s spending. Since this time, the value of the US dollar has declined compared to gold.

We are not taking any chances when it comes to YOUR deposits. History has shown that gold and other precious metals act as an insurance policy against the devaluation of the US dollar, which is closely correlated to the Canadian dollar. 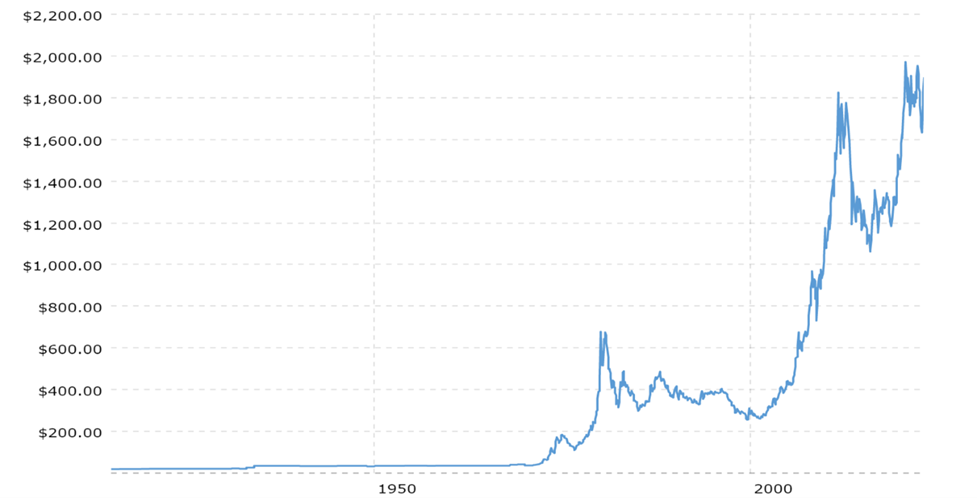 The gold and other precious metals are safely and securely stored in an offsite vault. We have access to the vault on fairly short notice, but the intention is to hold the gold indefinitely.

From time to time, the gold and other precious metals will be audited by our external third‑party auditors for our year‑end financial statements.

The intention is to never decrease our gold stores but rather to only add to our gold position over time as the value of our members’ deposits increases.

We are currently not yet in a position to sell gold and silver to our members. We will be looking at this in the near future to determine if it makes sense from an organizational perspective.

Unfortunately, no. Organizationally, we are not set up to be able to provide this service; however, this service would likely go hand in hand with selling gold or silver to members, if pursued in the future.

The intention is for the gold to work just like an insurance policy and to only use it when absolutely necessary; for example, in the unlikely situation of a liquidity or capital event.